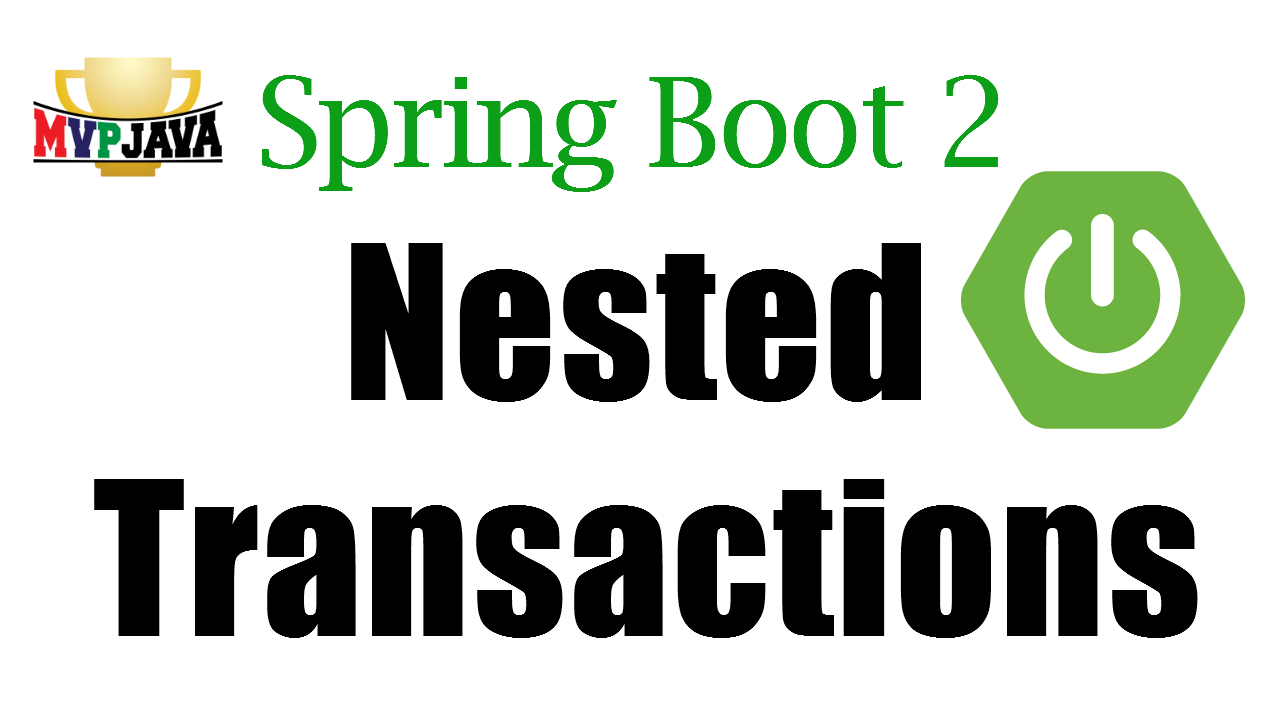 Spring has always supported the standard 6 transaction propagation levels whose names are analogous to those in EJB land. They are specified below and can be inserted directly with the following @Transactional annotation.

Why use Spring Nested Transactions?

Sometimes you have a large amount of data to push to the database (i.e 200,000 inserts).  Sure you want to wrap that up in a transaction to ensure for an atomic operation however you also don’t want to have to rollback the transaction if something goes wrong on inserting record 190,000. That would be a waste of time and resources.

If one of those sub-units encounters a problem (runtime exception by default) then the nested transaction will roll back internally through something called savepoints but the top level transaction will be allowed to continue.

Not all transaction managers support nested transactions. Spring supports this out of the box only with the JDBC DataSourceTransactionManager, which is what we’ll cover. This probably has to do with the fact that nested transactions cover a minority of use cases and make a specification harder to implement across all vendors (i.e: JTA implementations).

The other limitation has to do with the way Spring AOP works in regards to proxy’ing your Spring beans. You cannot have a method with @Transactional annotation on it that calls another method in the same class that also has its own @Transactional (i.e: NESTED) and expect that to work.

There are simple workarounds for this within Spring AOP without resorting to a full blown AOP implementation such as AsjectJ AOP – which requires extra tooling and setting up.  I personally am not a huge fan of the design behind those workarounds and I only present one of them (there are 3) in this post since this is exactly the limitation we come across in this use case.

The application I’ll use to showcase uses the following dependencies. You can also shoot over to MVP Java’s GitHub here for the source. I’ve kept the example lean and to the point so we can solely focus on Springs nested transactions.

For this tutorial, I’ve used a use case that I myself have come across in my professional career. Back in the days were I was working for the Canadian Space Agency, we had to build a huge list of spacecraft commands to be uploaded to the satellite everyday.

Why? Well, it needs to know what the heck it’s suppose to do and at what time. Stuff like turn this equipment on, turn this off, rotate this,  take this image with these parameters for this long etc … 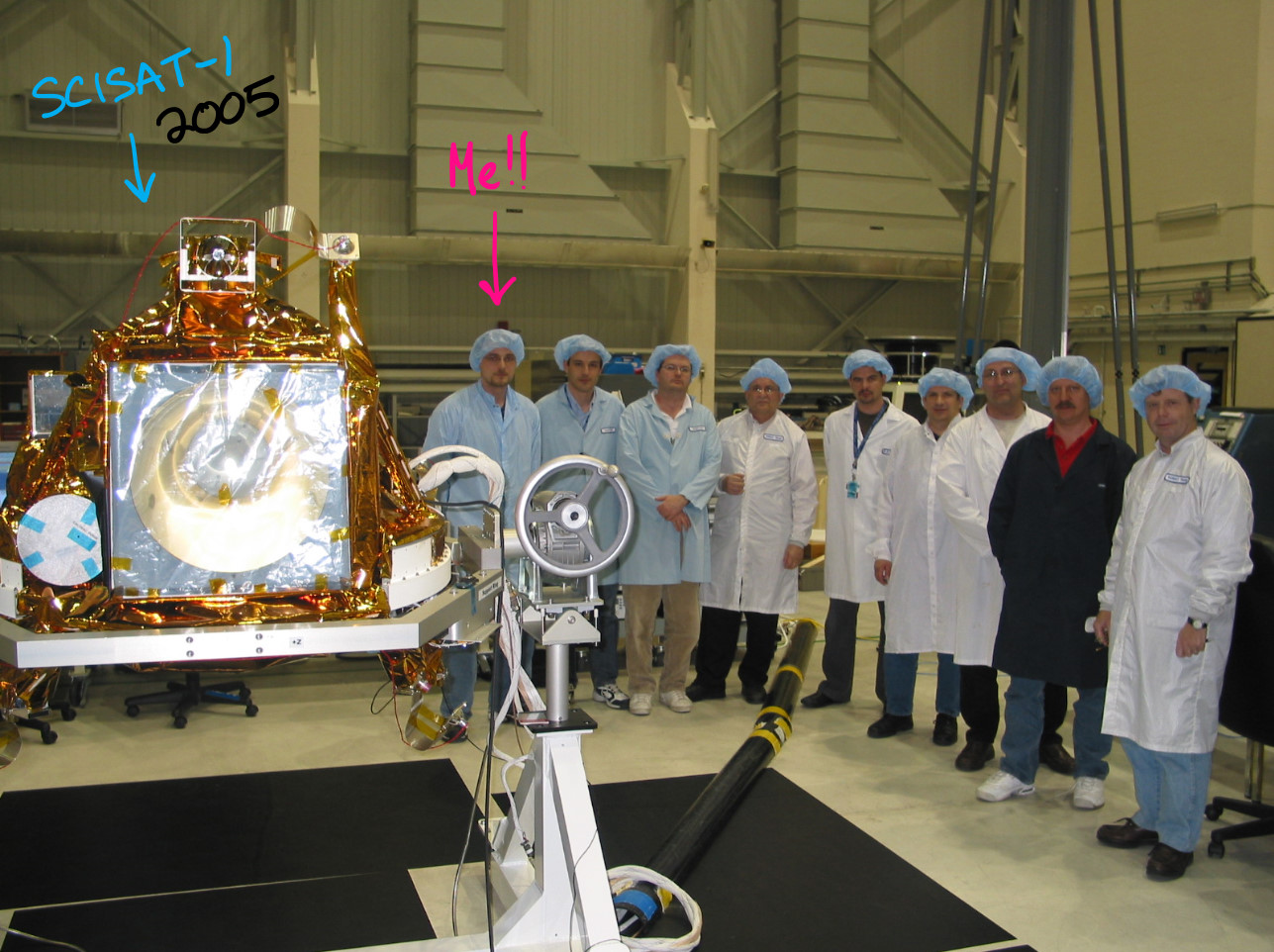 Me Back in 2005 at CSA in Ottawa with SCISAT-1 (in picture above). We had to generate this list of timed commands in the database. It was actually Microsoft Access if you can believe it!  The list was an artifact to upload the next day to the satellite which would last be valid for the next 36 hours.

Sometimes we can’t upload the entire file to the spacecraft since the RF upload signal/connection might be too weak and so we take a best effort approach – upload smaller chunks at a time. Whatever chunk isn’t confirmed to be committed to the on-board spacecraft database, we take inventory for another attempt at a latter time and continue to the next chunk. This approach is very similar to how NESTED TRANSACTIONS function.

So in keeping with that spirit and keeping it really simple, I’ve generated a list of satellite timed commands as SQL directly in Java code and then upload them to an embedded H2 database. Sorry guys, I left the Canadian Space Agency 10 meter antenna back in Canada 😉

The Spring Boot application really comes into play on line 23 where it prepares and attempts to upload 10 SQL commands representing the satellite  timed commands via the upload method.  Yes only 10 commands, why not 200,000!? Let’s keep the example simple, I don’t think you’ll like to scroll through 200,000 lines!  The principle will be the same.

Once the upload is completed, the application is purposely paused until you hit <Enter> in the console view in order to inspect the H2 Web console at http://localhost:8080/h2-console  with database URL=jdbc:h2:mem:satellitetest

If Spring Boot encounters a file named schema.sql in the src/main/resources directory, it will use it against the H2 Database on loading of the application. This is exactly what I’ve done to bootstrap the schema. The following DDL will allow us to specify String commands which are time stamped (AKA: Timed Commands)

As for the actual data that goes into the TIMED_COMMANDS Table, we’ll be doing that through application code.  We want to simulate inserted all those timed commands with NESTED Transactions instead of putting then in a single big transaction. This is why we’re not putting the SQL commands in src/main/resources/data.sql for Spring Boot to insert for us – defeats the purpose of the example.

The idea is to start the top level transaction once the upload starts which is at the @Service level. We accomplish this by placing the @Transactional annotation on the UploaderService interface itself instead of the implementation class (which you can do either way). By default, the REQUIRED transaction propagation level is used and doesn’t have to specified as so  – @Transactional(propagation = Propagation.REQUIRED)

This will start a new top level transaction which will be committed (or rolled back!)  once the method completes.

The implementation Class SatelliteUploaderService below will create sub-partitions (smaller sized chunks) of the List of SQL Timed Commands.  We tell the Lists.partition on line 26 that we would like that each partition have a size of 3.

Here is the breakdown of the partitions with some id’s next to them for reference (i.e: Partition 2 consists of Timed Commands with id’s 4,5 and 6) …

Notice on line 31, we use our Spring dependency injected dao to up-link each individual partition via the uplink method. It is the uplink method that will run in a Spring NESTED transaction (show below). You can see that the method is annotated with @Transactional(propagation = Propagation.NESTED)

Why didn’t I just place both the upload and uplink method in the same interface/Class? Wouldn’t that of been simpler and maybe even make more sense? Remember the Spring AOP limitation I described above! You can’t have the method upload call method uplink in the same Class so I opted for this design.

I’ve introduced a boolean flag to induce a random exception which will case the spring nested transaction to rollback for demo sake. This way, we can actually see the rollback in action in the logs later on.

You can see the ‘nested.txt.failed‘ boolean property is injected via the @Value annotation on line 43 above. This is actually a good time to show you the application.properties file …

Spring Nested Transactions – How They Work

Instead, a savepoint gets created,. You can think of this as a safe place to return to if ever something bad happens, i.e: runtime exception.

If the nested transaction succeeds then the savepoint is released and execution is returned to the top level transaction where its changes will eventually be committed.

Here is the console log of the application successfully uploading the entire 10 times commands. You can see the breakdown with the on-image annotations made below. Use the magnifying glass plugin provided when moving the mouse over the log image for details. 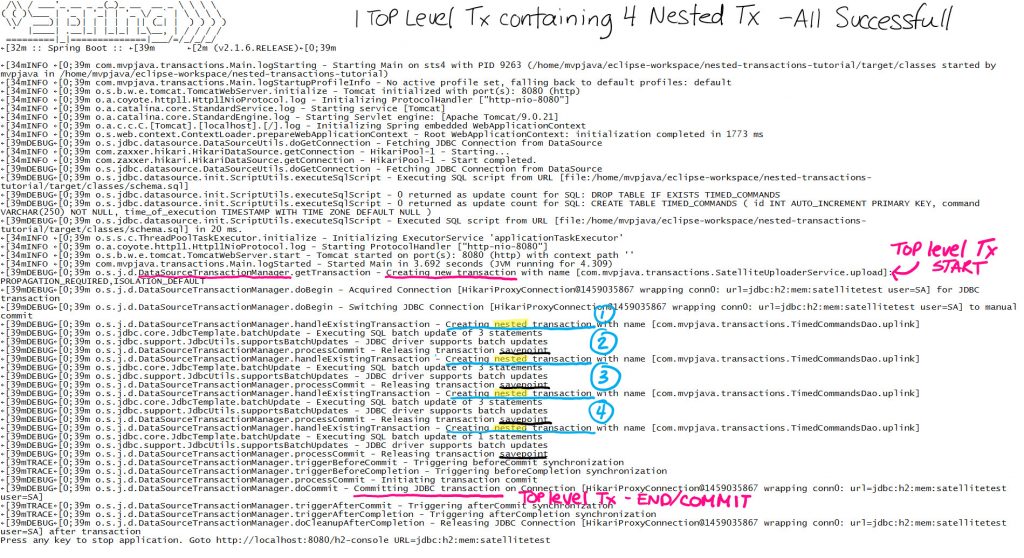 Here is what ended up in the H2 embedded database, all 10 commands have been committed. 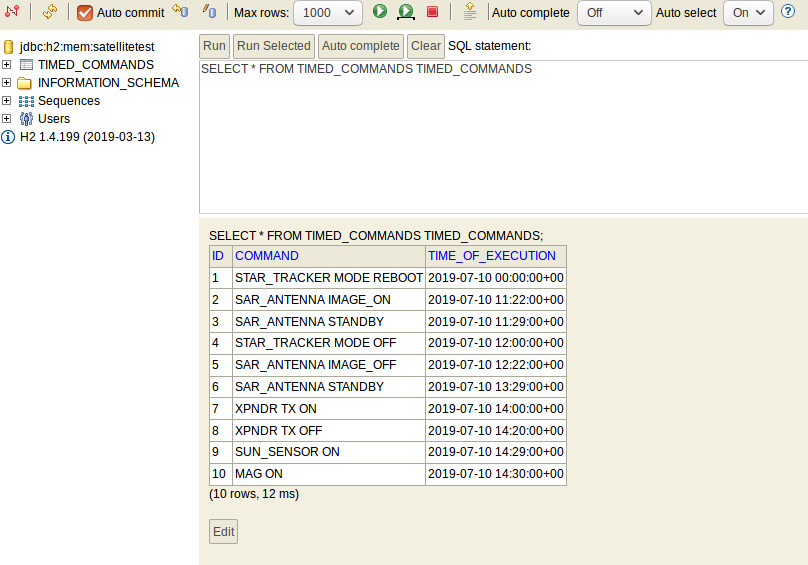 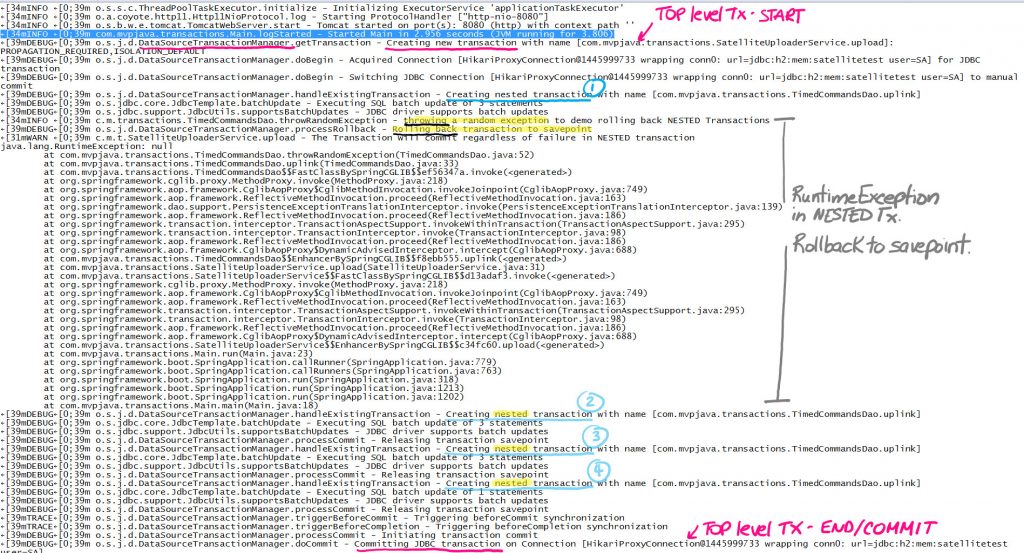 We can also confirm in the H2 database that the spacecraft timed commands are missing for id 1, 2 and 3 since they were part of the first nested transaction that rolled back. 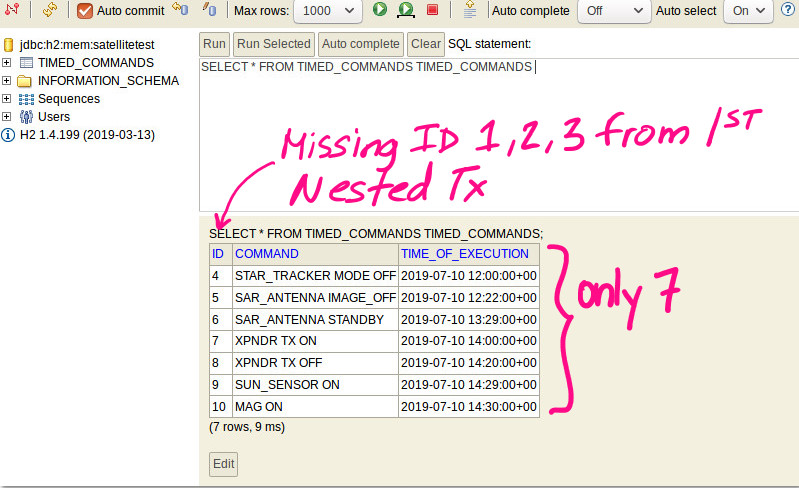 Although I have always found Spring nested transactions interesting, we have to keep in mind that it is the least portable solution of all the 7 transaction propagation levels.

One thing that I did not do in the example in order to keep it simple but that is vital, is to catch the exception and log as much information on the nested transaction failure as possible. Log which batch got rolled back, their id’s etc .. since you’ll need to get an inventory of this for your next attempt at a latter time.